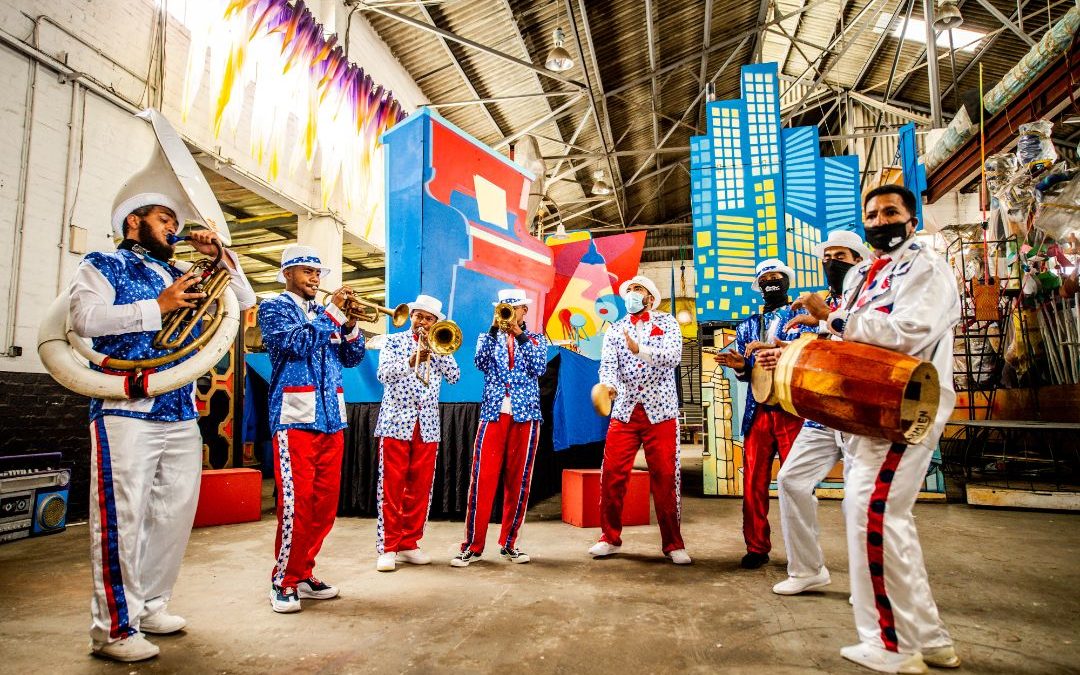 Set against a backdrop of giant multicoloured floats and colourful costumery, attendees got a two-hour taste of the 1950s and ’60s Drum era through iconic fashion, foot-tapping marabi and kwela music, dancing, evocative black-and-white photography, and historical commentary from presenters, emphasising Sophiatown and District Six as freedom spaces.

“South African music and dance in the ’50s and ’60s was vibrant and exciting, expressing the creativity of people under enormously difficult circumstances,” says Jay Douwes, CEO of Cape Town Carnival. “Despite the hardship and uncertainty of those years, music, dance and creativity ignited hope and pride and created opportunities for a greater sense of connection and resilience – and the same is true today. At Cape Town Carnival we provide opportunities for artistic expression and celebration as a way of coping with current circumstances.”

Kicking off with energetic kwela dance by talented Carnival lead performers Chante Wildeman and Unathi Makhambi, attendees were introduced to the Drum era, which saw the emergence of a vibrant culture, expressed in streets and shebeens, in a flamboyant “gangster” style, and through literature and music, including jazz. Drum magazine highlighted this unique black urban culture, and featured journalists and photographers like Jürgen Schadeberg, Bob Gosani, Peter Magubane, Ernest Cole and Alf Khumalo whose work came to define the era.

“Though the era has been romanticised through iconic photographs and magazine covers, what many people don’t realise is that it was an incredible time for music, story-telling and journalistic genius, drawing from the social context,” says Brad Baard, creative director for Cape Town Carnival.

“Music and dance helped create spaces for gathering, to navigate the struggle, and as an intentional space to find joy, freedom and love,” says curator and sociocritical adviser Khanyisile Mbongwa.

Music from David Kramer and Taliep Petersen’s District Six the musical including ‘Seven Steps of Stones’, ‘When The Southeaster Blows’, and their famous ‘New Year Song’ brought many participants closer to home and into exploration of District Six. Participants learnt about the multicultural ethnicities of District Six, before apartheid’s brutal forced removals in the late ’60s. This inner-city Cape Town suburb was home to Malay, Eastern European, Indian, Chinese, East/West/North Africans, former enslaved people, artists, musicians and activists, and was a rich hive of diversity.

Carnival participation coordinator Shaunnelle Davids took a deep dive into District Six culture and, along with the music, shared the evocative symbolic meaning of the actual seven steps, moving many to tears.

The workshop then introduced Sophiatown as the epicentre of politics, jazz and blues during the 1940s and ’50s. It was one of the oldest black areas of Johannesburg, home to a lively community in which daily activities from cooking to debating and partying all took place in communal yards and streets. Despite poverty and overcrowding, world-famous music and musicians came out of this suburb.

By way of example, songs like Miriam Makeba’s ‘Sophiatown Is Gone’, Dolly Rathebe’s ‘Unomeva’ and Dorothy Masuka’s ‘Magumede’ were shared. Choreographer Mbovu Malinga inspired and encouraged attendees to shake, jump and jive to the music of the Manhattan Brothers, Miriam Makeba and the Pitch Black Follies.

In closing, the workshop reflected on how the DNA of music from the era – Lemmy Mabaso’s ‘Cornbread and Blackeyed Peas’, Pat Matshikiza and Kippie Moeketsi’s ‘Tshona’, Hugh Masekele’s ‘Thuma Mina’ – is still so prevalent today, especially in jazz.

It also highlighted the premise on which so much of the iconic culture and cause were built: that despite the oppression and hardship of that era, people lived their identities. In the closing words of host facilitator Mbongwa, “We will play, we will make music, we will dance. We are here, we are fabulous, beautiful, joyful and daring!”

The public are invited to attend the Cultural Creative Workshops. Sign up for our next workshop as we explore Umswenko, the art of expressing oneselves. http://capetowncarnival.com/online-cultural-creative-workshop-series/