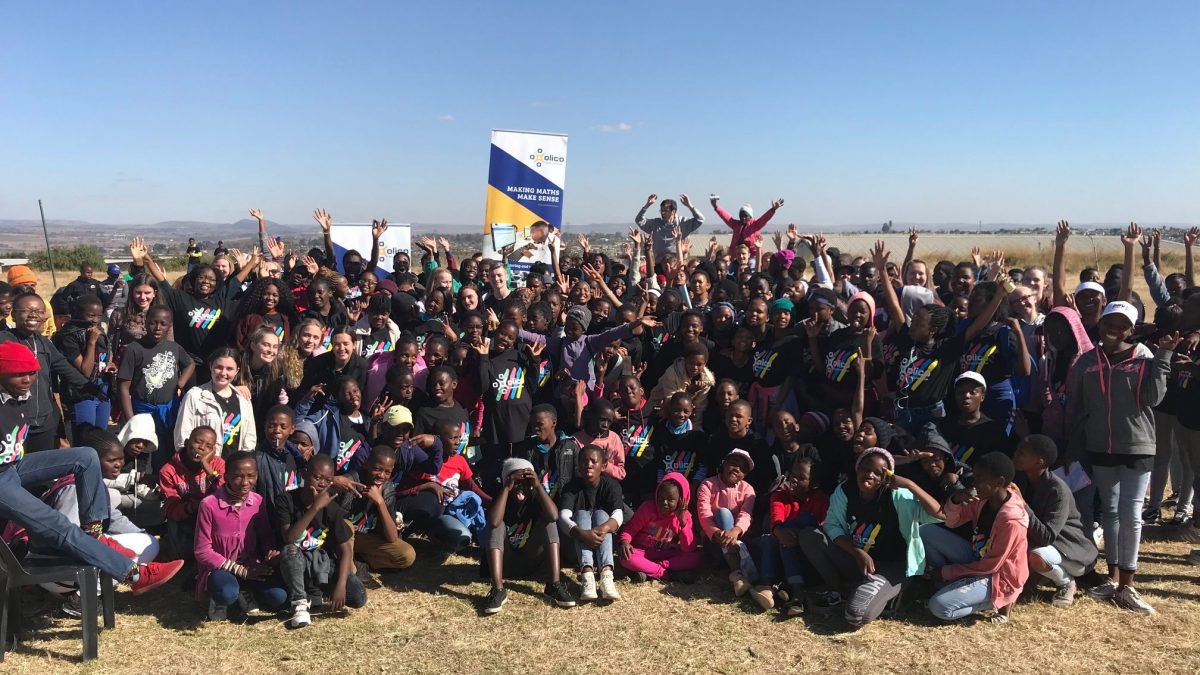 Johannesburg, 28 January 2020 – Considered a critical gateway subject for jobs needed to drive South Africa’s economic growth and development, maths education is heavily in distress. The number of students writing maths declined from 270 516 in 2018 to 222 034 last year, and only 54% achieved the 30% pass rate.

Yet despite this, just under 20 students from two high schools in one of the nation’s poorest and notoriously underresourced townships, Diepsloot, achieved Bachelor-level (50%) maths passes, placing them in the top 20% of maths performers nationally. The critical difference? These learners had undergone after-school tutoring and training on the OLICO Maths Education Programme part-funded by the Datatec Education and Technology Foundation.

“Township learners have multiple layers of added challenges that their affluent peers don’t face,” says Andrew Barrett, co-founder and national coordinator of OLICO. “Learners in these areas arrive in high school 3-4 years behind where they should be mathematically. Only 19% of the Diepsloot matric cohort from 2019 wrote and passed maths, and only 7% scored above 50%. But those matriculants who were on our programme accounted for a third of all Bachelor-level maths passes from the area, despite making up only three percent of the total Diepsloot matric cohort.”

Working in the Diepsloot community since 2011, with a razor-sharp focus on tackling the nation’s maths problem, OLICO provides a blended use of extracurricular maths tutoring and custom-built online maths programmes for Grade 7-9 learners, alongside maths clubs aimed at primary-school learners (Grades R-6). The maths clubs offer fun maths games and activities to build basic core number fluency and enjoyment of the subjects; more than 1 000 learners from Diepsloot are enrolled in the OLICO maths clubs for 2020.

Relying heavily on the corporate-funded support of socially conscious companies like the Datatec Group, OLICO works with over 180 high-school learners a year from Diepsloot, of whom 20-25 are matriculants. OLICO is trying to grow its reach in the township, increasing the number of high schools it’s involved with from two to four, and by 2024 it hopes to secure at least 100 Bachelor-level maths passes in a matric year (500% growth over the next four years).

STEM (science, technology, engineering and maths) careers are vital to fulfilling the country’s aim of reindustrialising itself and taking advantage of the fourth industrial revolution (4IR). However, a massive gap exists between existing skill sets versus what South Africa needs. According to the Pew Research Centre, since 1990 STEM occupations in America have grown by 79%, and seven out of the ten largest STEM occupations are computer related, with software developers, computer-user support specialists and computer systems analysts accounting for over half a million jobs. Wholesale and manufacturing sales representatives of technical and scientific products was the largest STEM occupation not related to computers, as well as mechanical and civil engineers.

“We believe that it’s vital to invest in organisations like OLICO that are working directly at addressing the STEM need in South Africa,” says Wilna de Villiers, Group Marketing and Communications Manager for the Datatec Group. “Our maths education faces many challenges in this country, but we believe that with long-term thinking, consistency and partnership, we can make a meaningful difference.”

And it’s dedication and consistency that have made Diepsloot matriculants and OLICO attendees such as Theo Mathebula and Karabo Hlaka succeed. About Theo’s determination to solve problems, Barret says, “He found ways to make his work interesting to him, so that he could actively engage it – clearly his attitude made the difference – and it allowed him to achieve a Bachelor-level maths mark which sees him studying this year towards a science degree.” Similarly, Karabo showed sheer determination, attending after-school sessions and making time to come after classes to ask specific questions. When he first joined OLICO at the beginning of high school, his mark for maths was 13%; he matriculated with a Bachelor-level maths result, and is about to start engineering/BSc degree studies.

“We’re deeply committed to improving our nation’s education situation, but there’s no silver-bullet solution to the problem,” says Barrett. “For many learners, it can take years to overcome the backlogs necessary to adopt a sense-making approach to maths, but we’ve seen that with targeted and dedicated after-school support, a massive difference in maths performance materialises.”

About Datatec Education and Technology Foundation

Datatec, a Johannesburg-based multinational information and communications technology (ICT) solutions and services group, is a company with a heart. Recognising that education is the base on which a successful economy is built, the company funds educational organisations serving underprivileged communities across the country through its Datatec Educational and Technology Foundation. In this way, Datatec gives back to the country and the economy that fostered its initial growth.

The Datatec Educational and Technology Foundation funds educational organisations whose purpose is to improve education within underprivileged communities in South Africa. Datatec’s corporate social investment (CSI) spend is directed into educational initiatives consisting of school-level intervention programmes for learners and teachers, and educational bursaries. Other initiatives include the provision of technology infrastructure and skills development for unemployed youth.

Through the support of school-level intervention programmes in maths and science, the Datatec Foundation has been able to directly benefit nearly 4 300 learners and 500 teachers. Better skilled teachers indirectly benefit over 100 000 learners in various parts of the country. The Datatec Foundation is financially supporting a number of foundations in South Africa, including the Tomorrow Trust, the OLICO Foundation, the Vula Programme, AfrikaTikkun and the Kutlwanong Centre for Maths, Science and Technology.