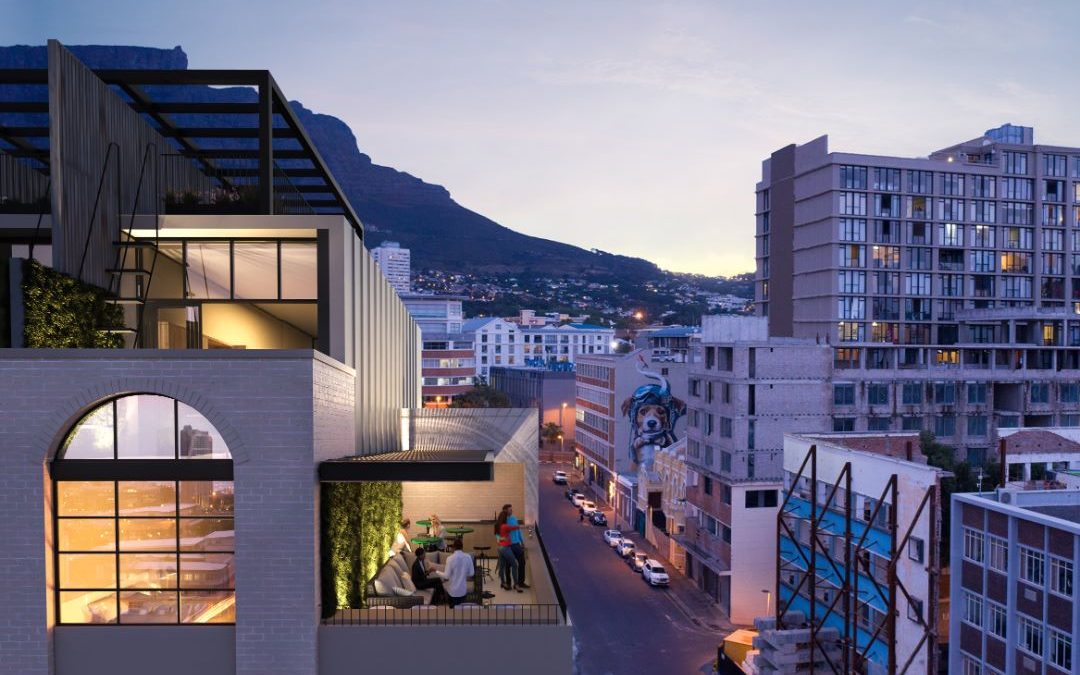 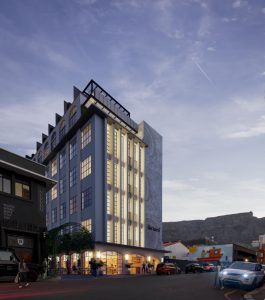 Cape Town, 29 November 2019 – Perfectly in pace with Cape Town’s booming co-working office market, The Harri, a 39-unit studio/penthouse apartment development, will go up on Harrington Street in the thriving East City Precinct between the CBD and District Six. A first of its kind for this previously gritty industrial-commercial area, The Harri combines residential living under one roof with co-working offices to create “co-living” space.

“The East City Precinct and surrounds are undergoing a miraculous revival, and interest by investors and potential owners in the development so far has been unprecedented,” says Jeff Kleu, co-developer with Steven Lampert, both of property-development company Sepia and Silk. Last year, the Cape Town Central City Improvement District (CCID) identified the area as having the highest overall occupancy rate (97%) of all four of its city precincts. A R75-million hotel opened there earlier this year, following three other commercial and retail developments in 2017. Two further residential mixed-use developments are planned for 2020.

“Because of our proximity to a fashionable entertainment and retail scene, as well as how we’ve merged micro-apartment living with pristine co-working office spaces to create a co-living environment, The Harri is very appealing to many professionals working for established creative, technology and design firms in the area, as well as visitors wanting a different inner-city tourism experience,” says Kleu.

Paul Luck of Lightspace Architects, the principle lead on the development, was responsible for The Park Inn by Radisson Cape Town Foreshore, Bombay Brasseries Restaurant at 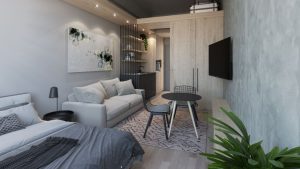 The Taj Cape Town, and The Everard Read Gallery at the V&A Waterfront. Dawn Dickerson, Carmel Naude, Juliet Eidelman and Martin Firer of Hot Cocoa Interiors and Design, who were responsible for the interiors and furnishing, have similarly handled a number of high-end projects for key clients, including Sir Richard Branson’s hotel and manor house in Franschhoek, Spier Hotel near Stellenbosch and the Marine Hotel in Hermanus.

The Harri’s onsite amenities include wifi, a concierge, a housekeeping service, a laundry room, 24-hour access-controlled security, innovative storage units, vehicle and bicycle parking, and a restaurant on the ground floor. The co-living and co-working spaces, opposite the residential side of the building, include fireplace lounges, TV rooms with large smart TVs and access to Netflix, open-plan kitchenette/dining areas, a rooftop terrace with a gas braai and mini-bar, and slick and contemporary co-working offices.

Gardens Shopping Centre, Virgin Active Wembley Square and the MyCiti bus stop on Roeland Street are all within a few minutes’ walk of The Harri. “Our residents, whether they’re owner-occupiers or visitors, will naturally want to step out and enjoy the bars, artisanal bakeries and beautiful galleries in the East City Precinct,” says Kleu. 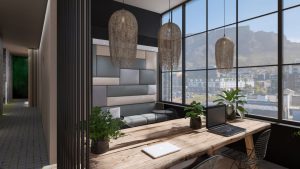 One of these is Charly’s Bakery, a family-run business with a huge following that has been a fixture in the area for thirty years. Owner Jacqui Beiss says, “People love this area, and love discovering new places in it. Tourists love coming here. And such lekker things are happening here, like unique little businesses as opposed to big corporates. I love it here.”

The Harri development has been pre-approved by bond originator Ooba for 90% homeloan finance, and apartments can be secured with a non-refundable security deposit of R10 000, with seven days to pay the balance.

The Harri was creatively conceived by Steven Lampert and Lisa Blacher who were seduced by the contagious energy of the East City Precinct, which motivated them to invest in the area by purchasing 75 Harrington Street. They then joined forces with property genius Jeffrey Kleu, who in collaboration with Lampert have injected their unique expertise, to create this bespoke product that understands, resonates, embraces and enhances the energy of this emerging gentrified area. Lampert is the founder of KidKraft, Inc., a global premium wooden-toy manufacturer and distributor. Lampert is no stranger to identifying a concept and expanding it on a global scale, having built KidKraft from a fledging toy company in 1993 to one of the largest toy companies in the world, with offices in Dallas, Amsterdam and Hong Kong. The products are sold on seven continents. Lampert believes in working with great people who share his vision of building a collaborative organisation, across oceans and continents that transcends borders and cultures. Kleu is an accomplished property investor, developer and broker whose most recent project was Park Corner in Rosebank, Johannesburg, an eclectic mixed-use development that’s had rave reviews in, among others, the Mail & Guardian, Habitat magazine and Wanted Online. Lampert along with Kleu look forward to exploring many more commercial opportunities.